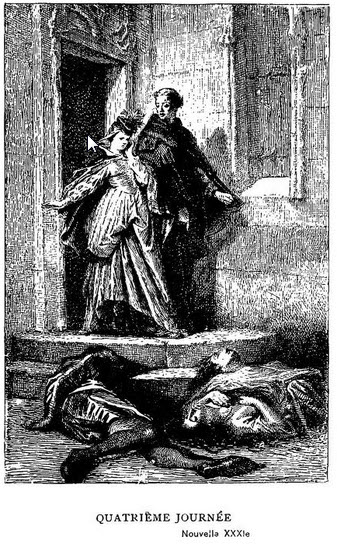 The theme of the day's stories is virtuous patience as exemplified by long suffering wives who patiently work to win over their unfaithful husbands.

Geburon starts off by telling a story that he says he heard from Monsieur de Saint-Vincent, Ambassador of the Emperor, and how a monastery of Grey Friars and all of the monks within it was burned down as a memorial to the wickedness of one of the monks.

As a contrast to the previous story, Oisille tells a tale of an emissary of the king who is put up for the night in the manor house of a noble man. At dinner he witnesses the man's wife drink from a skull and then retire from the table without speaking to anyone. Upon asking the cause of this, the emissary is told that the wife had cheated on her husband who killed her lover and now punishes her with a constant reminder of the man she loved. "That she may not lose the memory of this villain I cause her to be served with his skull, (2) in place of a cup, when she is eating and drinking at table, and this always in my presence, so that she may behold, alive, him whom her guilt has made her mortal enemy, and dead, through love of her, him whose love she did prefer to mine. And in this wise, at dinner and at supper, she sees the two things that must be most displeasing to her, to wit, her living enemy, and her dead lover; and all this through her own great sinfulness."

Through the emissary's intercession the husband and the wife are reconciled and he forgives her, and they go on to have many children together.

The members of the party disagree on whether the woman's punishment was justified. "The punishment," says Parlamente, "was in my opinion a most reasonable one, for, just as the offence was more than death, so ought the punishment to have been." However, Longarine asked "How can shame be repaired? You know that, whatever a woman may do after a misdeed of that kind, she cannot repair her honour."

"I pray you," said Ennasuite, "tell me whether the Magdalen has not now more honour among men than her sister who continued a virgin?"

Simontault then says that "Many an abuse lurks even under the guise of a miracle, and for this reason I am minded to tell you the story of a miracle that will prove no less to the honour of a pious Prince than to the shame of a wicked minister of the Church." He tells the story of a wicked priest who had impregnated his sister, and claimed that it was a miracle birth. But his trickery is exposed and both culprits are published.

Nomerfide's contribution to the Heptameron is of two Gray Friars who eavesdrop on a butcher's conversation and completely misinterpret what he is saying, leading to comical results. The moral of the story is "how bad a thing it is to listen to secrets that do not concern us, and to misunderstand what other people say."

Hircan is chosen to tell the next tale and he chooses one which will illustrate how both men and women are prone to vice except through the grace of God, about a lady who forms a "spiritual" relationship with a Grey Friar, but is brought back to the right path by her husband. He did so by dressing up in the Friar's cloak and impersonating him. He then beat his wife with a stick, pretending to be the friar, so that the woman came to hate the friar who was actually innocent. 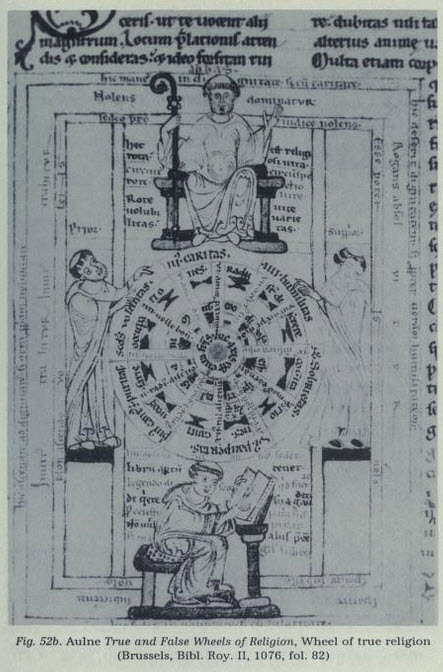 Ennasuite's turn was next. She chose a story which she promised would spare neither man nor woman. The wife of an older man fell in love with a young clerk. When her husband was away at court, her lover would come to her rooms. The husband was tipped off by his faithful servant and went into his wife's bedroom while the servant waited outside. He caught the two in the act, but he did not want to bring shame upon his family name. Therefore he ordered his wife to get dressed and told her lover to hide in the closet. He then went outside and berated the servant for lying, and blamed him for lying. He fired the servant but gave him a generous severance. He then told the lover to be gone, but spared his life, and after a few months he poisoned his wife and made a big show of mourning her. In this way no one suspected that she had been unfaithful and his honor was spared.

The story is said to be based on real events involving Jeffroy Charles or Carles, Chief President of the Parliament of Grenoble, and President of the Senate of Turin; his wife's name was Margaret du Mottet.

Dagoucin is the narrator of this story about virtuous women. A faithful wife woos her unfaithful husband back to her using love and patience.

Longrine's story is about another virtuous lady, whose virtue is even more deserving of praise because she was not of hight breeding. In this story a lady is so loving towards her unfaithful husband that he turns away from his mistress and goes back to his wife.

Next to speak is Saffredent, who picks a story that will "prove to you that God does not favour lovers." He tells the story of The Lord of Grignaulx who was away for two years on court business. When he returned he found his house vacant and his wife living in another house nearby out of fear of a ghost that haunted the place. Being someone who did not believe in superstitious things such as ghosts, the Lord resolved to rid his house of whatever was causing his wife to be afraid. He laid a trap and discovered that it was one of the maids pretending to be a ghost, so she could drive the mistress of the house away and she could have the house all to herself and her lover, one of the other servants.

The two were soundly beaten and the "ghost" driven away.

Parlamente tells the sad tale of a man who murders his sister's lover and the ruin that later befalls him and his house.